At the heart of Kidztown, the circus themed Raucous Rascals stage is a childs sized piece of Boomtown fair with musical delightas and theatrical performances for all ages.

The Kinetika Bloco is a performance group with an exuberant mix of young brass and woodwind players, drummers, steel pan and dynamic dancers all in costume creating a “unique new British Carnival sound with a decidedly London edge” (BBC Radio2). We draw our influences from the Caribbean, Brazil, West and Southern Africa, New Orleans jazz, Funk and Hip Hop. Our members create the work with a team of professional tutors and help to lead the organization. Our achievements include: performances at Notting Hill Carnival, Bestival and London Jazz Festival; headlining the Roundhouse; performing for Nelson Mandela who called us “enchanting”; representing the UK at Beijing Olympic Festival; leading Team GB in the London 2012 Victory Parade; collaborating with major artists like AfroReggae and Jerry Dammers at high profile venues including Southbank and Barbican; launching BBC Get Creative; opening the London Marathon; and starring on BBC 1Xtra and BBC Radio 3’s Young Artist Day.

Kinetika Bloco was established as a charity in June 2010, but has been in existence since 2000 when it was first established as a project within Kinetika Art Links International. In 2016 we became a Youth Company in Residence in Southbank Centre. We have been accepted as an Arts Council National Portfolio Organisation for 2018-2022. 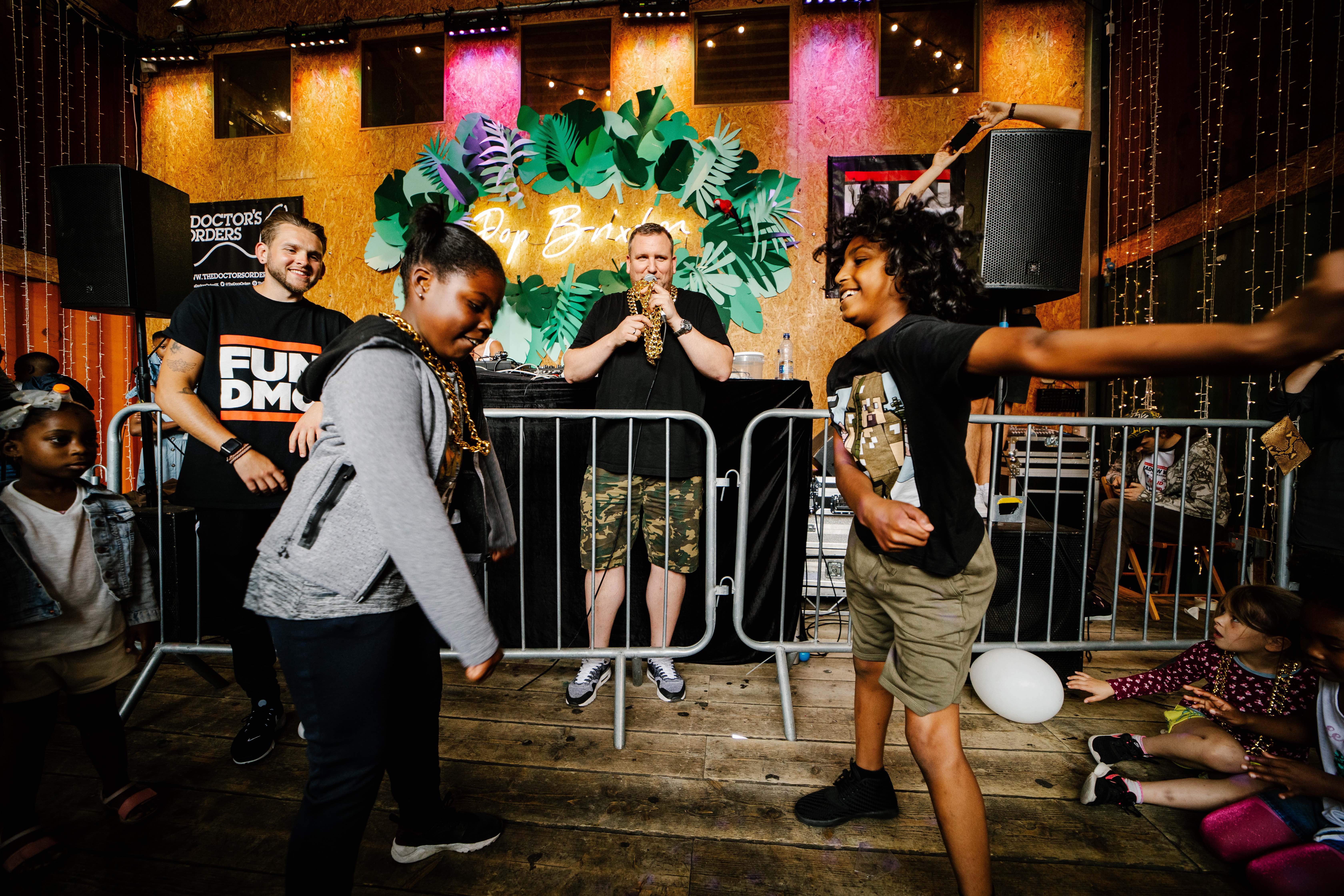 Whether the proud parent of a Lil Wayne, a Missy Elliot or a whole crew of Beastie Boys or Wee Papa Girls Rappers, FUN DMC is the perfect jam for you and yours.

Here you can take part in a real block party experience designed with both parents and children in mind with areas to dance, practice graffiti, play with super-fly Hip-Hop fancy dress, or just chill and enjoy a drink.

We (BOSI) are creators of inspired madness and controlled chaos in the public realm. We believe that by engaging people in a conversation that extends beyond the absurd, we can impact genuine social change.

We work with a range of partners stretching across heritage, the arts, public realm and community organisations. The way we approach our work depends on the partner and the purpose.

The grown-ups have clearly made a mess of the world so Kidocracy offers the next generation a chance to rule instead! An interactive comedy show for ages 6+

The world in a state of chaos. The grown-ups have clearly made a mess of things and so Kidocracy offers boys and girls a chance to rule instead. They must elect leaders, come up with rules that rock and deal with all sorts of crises because running the world isn’t just all fun, fun, fun, there’s stuff to be done as well…!

A unique and exciting performance for children that shows the importance of participation in a democracy, Kidocracy gives a young audience the chance to learn a little bit about politics and governing while having fun at the same time.

Focusing on various challenges, the audience get to debate (in an entertaining way) the problems the world is facing and how they would deal with it, creating a sense that participation is vital and that everyone’s voice is important. Kidocracy involves all the audience giving children confidence to speak up and hopefully take an interest in what’s going on the world. If nothing else, maybe Kidocracy will inspire enthusiasm in the youngest generation to fix the mistakes of the grown-ups of which there are plenty!