As many are aware for the past 2 years we have been working alongside The Loop to provide front of house drugs safety service, we are deeply saddened to announce that they are no longer able to provide the drugs safety testing service at the festival this year.

We were informed towards the end of last week, the provision of this service at this year’s festival may no longer be possible. Since then, we have been working around the clock with all the key stakeholders to try to find a resolution, however, despite all of our efforts, the ongoing legal complexities has meant that The Loop are unable to provide the front of house drug safety testing element of their valuable and respected services at this year’s event.

We will continue to provide our robust and extensive medical and welfare support onsite and The Loop will still be in attendance providing expert one-on-one counselling, drug awareness and safety advice for free at this year’s festival. We will also work with our back-of-house drug testing service provider, TICTAC, to identify harmful substances circulating at the festival and keep those in attendance informed with as much factual information as possible throughout the weekend via our social channels, festival app and on the ground.

Please remember drugs are illegal and can, and do kill.
No drug is ‘safe’.
Respect yourself. Respect each other.

What Harm Reduction provisions will Boomtown have in place?

We have extensive Harm Reduction and Public Safety measures in place to safeguard all those in attendance.

We will also utilise our back of house drug testing providers, TICTAC, to identify harmful substances circulating at the festival and keep those in attendance informed with as much factual information as possible throughout the weekend via our social channels, festival app, on the various operational screens and information points across the festival.

In 2017, with the support of the local authorities we changed our drugs stance from ‘Zero Tolerance’ to the ‘Four P’s’ - (Prevent, Protect, Prepare, Pursue) which is now becoming a festival industry-wide approach to harm reduction. It treats drugs usage as more of a welfare issue than criminal. This also allowed our messaging to be more honest, open and informative.

Do everything we can to keep drugs out of the festival:

For more information on what our security are briefed to do head to our Safety & Security page.

See drugs as a welfare issue:

Processes to deter illegal drug supply and the open use of drugs:

Please read below for information on the four areas we have highlighted as key points that many people should be fully aware of before experimenting with drugs;

Throughout the festival, we will be keeping everyone informed as best we can with any substances of concern that are identified via our back of house testing service TICTAC. Please ensure you are following all of our official Boomtown platforms on social media, as well as download the festival app here to receive notifications should we need to issue urgent updates. It’s also worth following The Loop on facebook, instagram or twitter for additional information and advice.

Here are some recent findings from drug testing at UK festivals:

(Please note: high strength does not mean better! It increases all the risks. Always go slow.) 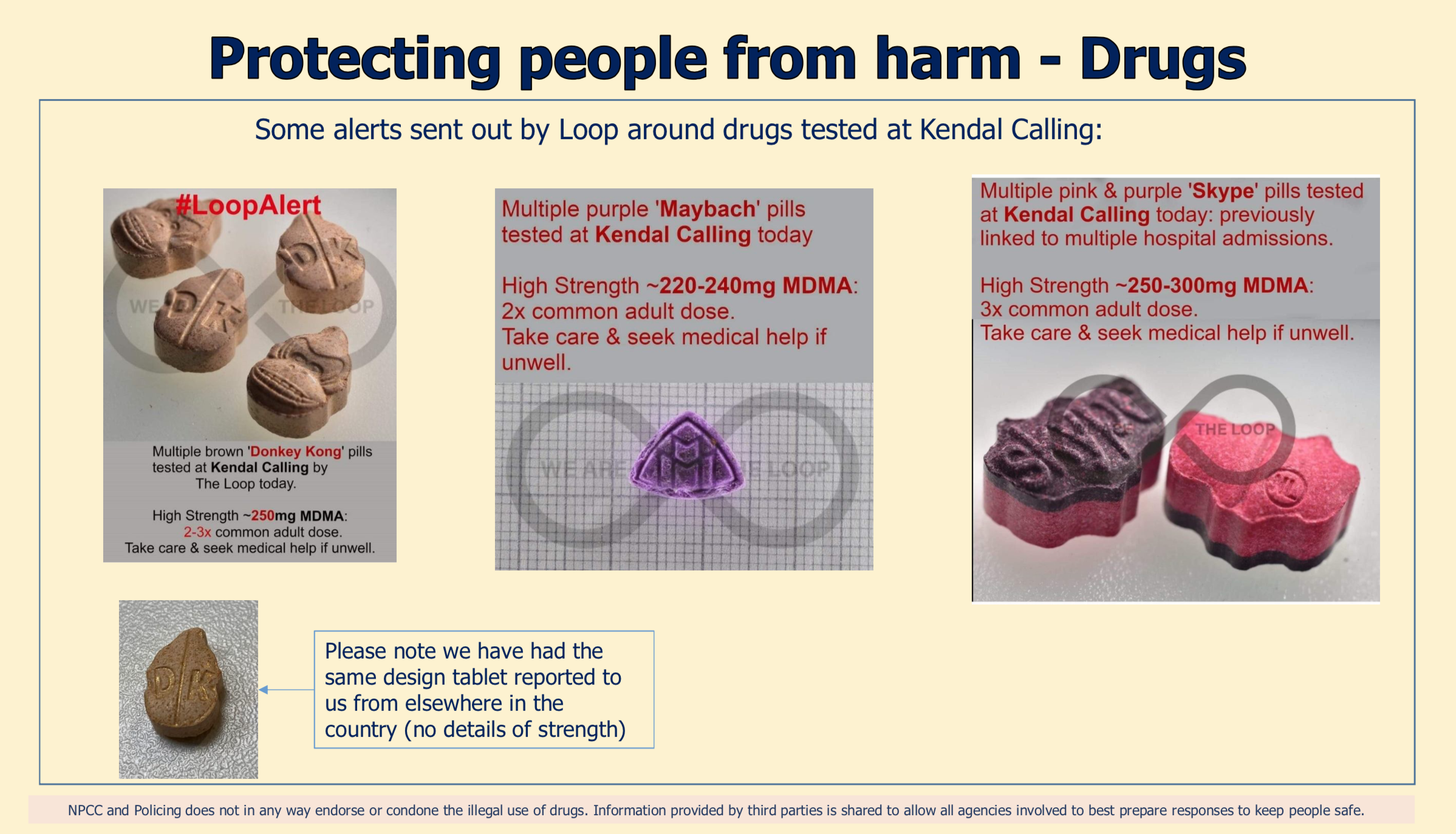 2. Increased strength of drugs on the market:

It is so important to know what you’re putting into your body. Due to the unregulated production of illegal substances, each and every pill, powder or liquid is likely to be different and therefore could have an entirely different effect.

Ecstasy deaths are approaching the highest they have ever been. In 2005, pills contained around 80MG of MDMA. Now, the average sits at around 150MG, but new pills popping up have tested upwards of 350MG. Which is nearly x4 the strength. Stronger IS NOT better. It’s more lethal. ALWAYS start slow and allow your body to feel the effects.

A lot of drugs have come on the market recently that are incredibly pure, which doesn't mean they are ‘safer’ or good for you... Always pace yourself, stay with friends, and do not mix substances.

The crush-dab-wait campaign from The Loop is a really helpful approach.

BBC 3 also recently released this short film called How Not To Die with some really useful advice and important information.

3. Be aware that drugs can and do kill (even if you don’t think it could ever happen to you…)

Always know what you are taking and the likely effects it will have on you, especially if mixed with other substances (SEE BELOW). Make sure you are with friends and know what each other are taking, where it came from and the key factor of all, pace yourself.

Respect yourself, your surroundings and most importantly, your body.

At recent events, we have again seen the rise in people being admitted to our medical and welfare with serious side effects from Ketamine misuse.  Whilst it is not the only drug we see to cause harm, it is one that we feel needs to be kept in the spotlight as can be so damaging to individuals as well as to the greater festival experience.

Here are some of the highlighted risks involved with using Ketamine:

Not only does taking Ketamine dissociative you with the festival surroundings, rendering being at the event almost completely pointless for many using Ketamine, it also has some very serious and very real side effects;

Just because a drug has been prescribed by a doctor it does not mean it is safe for use in any other way then one instructed by the physician. The most common prescription drugs to be misused include sleeping tablets or tranquilisers (benzos), anabolic steroids, painkillers and treatments for mental health issues.

The drug group benzodiazepine, (‘benzos’) are primarily misused to come down from other drugs such as ecstasy or speed (amphetamines). It is a highly dangerous combination as the tranquillisers can be ‘numbing’ and when taken with alcohol the combined depressant effects can easily cause a fatal overdose by inhibiting breathing or slowing down vital organs.

If you feel unwell, or even just a bit uneasy and need some support, please seek out one of the festival representatives, either from medics, welfare, steward or security and they will help you to a place of safety. Please don’t feel you will be judged or get into trouble, they are there to help you and keep you safe, that’s their main responsibility!

4. Dangers of polydrug (multiple drug) use:

Using more than one drug at a time is known as polydrug use. Poly use intensifies the effects of any individual drug and makes them more dangerous. For example, mixing stimulants, such as ecstasy and cocaine, can increase the high, but also the risk of heart attack. Combining substances can not only have fatal effects on the body, but can also affect the mind by severely depleting serotonin levels in the brain, which can spark issues such as depression and anxiety.

Mixing alcohol and other substances is probably the most common form of polydrug use, as many people don’t think of alcohol as a ‘drug’. Alcohol can however, have a big impact on the way many substances affect you. Some of the time this involves it enhancing the effects of the other drug, but with many substances, alcohol can create a dangerous, potentially fatal, chemical reaction.

The more drugs that are used simultaneously, the greater the risk is. Do not mix substances. Make sure you are fully aware of all the dangers and side effects that could be caused. ALWAYS make sure your friends are aware of what you are taking and that someone is with you at all times.

This combination results in the formation of an entirely new chemical in the body — cocaethylene. In other words, when cocaine is broken down in a body that is also intoxicated with alcohol, the long-lasting chemical cocaethylene forms instead of the usual cocaine products.

Alcohol may moderate the high you get from Ecstasy, and you may not feel as strong an effect as usual. But then it is likely that you will feel much worse when you come down off these drugs.

Alcohol abuse may be combined with Ritalin, Adderall, methamphetamine or amphetamine. Some diet pills, over the counter cold remedies and even strong energy drinks can also be dangerous.