Planning is underway for this year’s annual fair and we’re on the lookout for new crews with fresh ideas! We are looking for a range of crews, from new talent who want to try something new to experienced collectives who have something fully tried and tested. Your application will need to work with our overarching Boomtown narrative, so before writing your proposal to us, check out the Boomtown story and scroll down for a closer look at our district outlines below.

Are you a theatrical collective with a mixture of creative build crew and immersive performers? Then pick a district and mould your idea for a potential venue, interactive room, hatch or window. You will be responsible for the creation, build and running of your venue/room/hatch/window over the weekend so please don’t apply with a one-off show. Everything other than a window will need to be open 1pm - 7pm Fri - Sun and be up for being part of the maze. Check out “The Library” as an example… 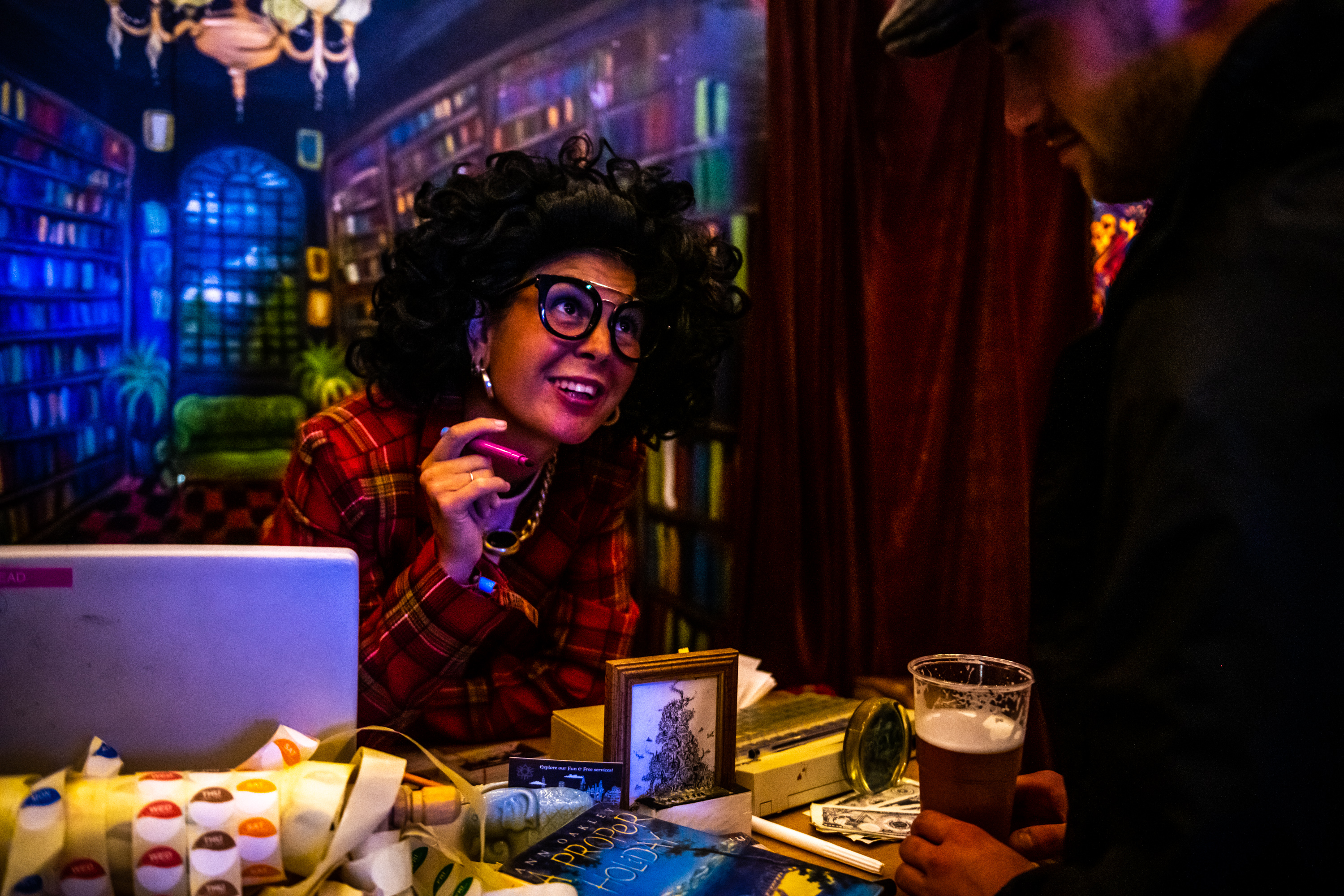 Are you a music collective that specialise in genres that are underrepresented at Boomtown? Then have a glance over the districts and use them as inspiration to create a new street venue. You will be responsible for the build, programming and running of your venue over the weekend so please don’t apply with a one-off show. Check out “Little Pharma” or “Shamrock” as an example. 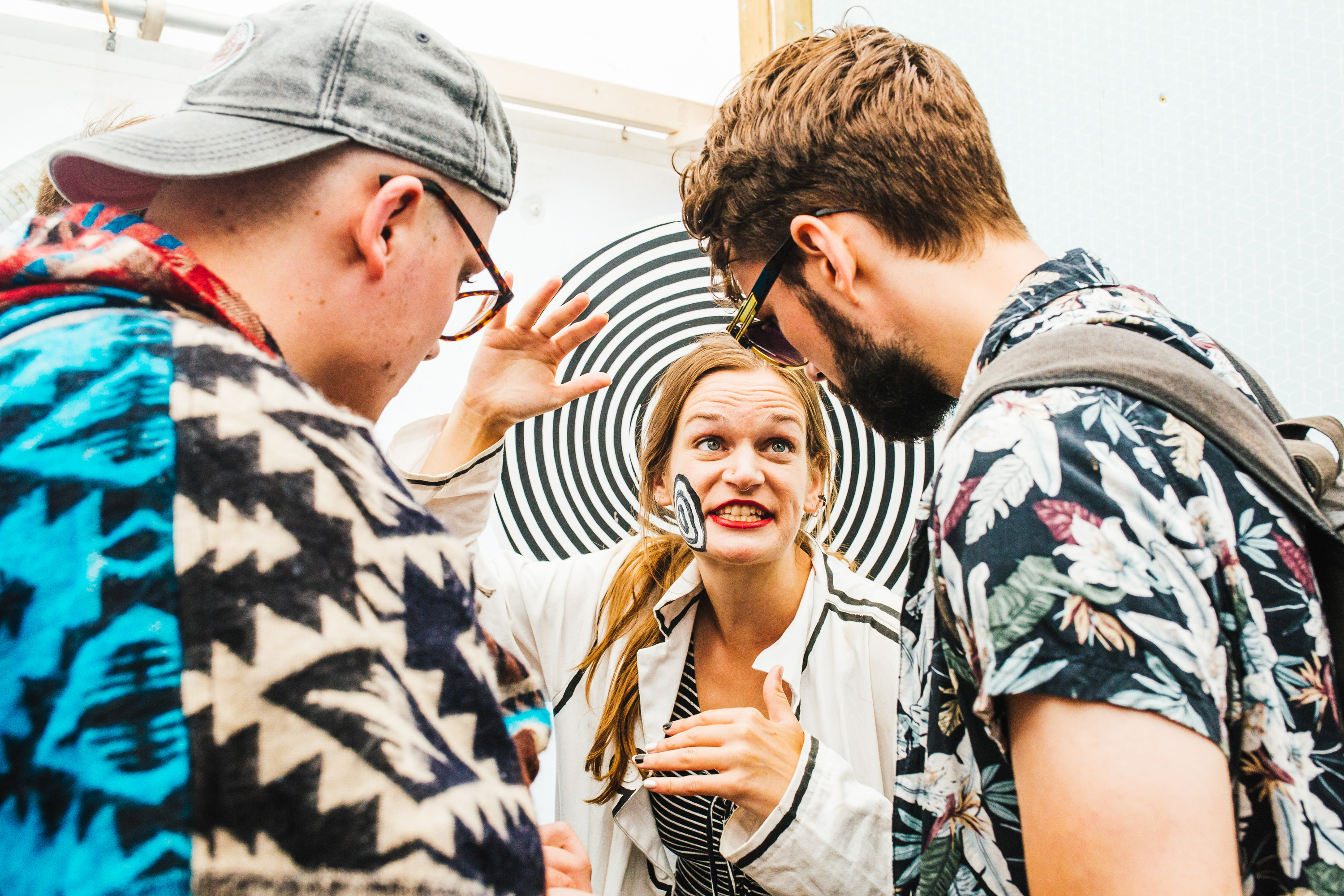 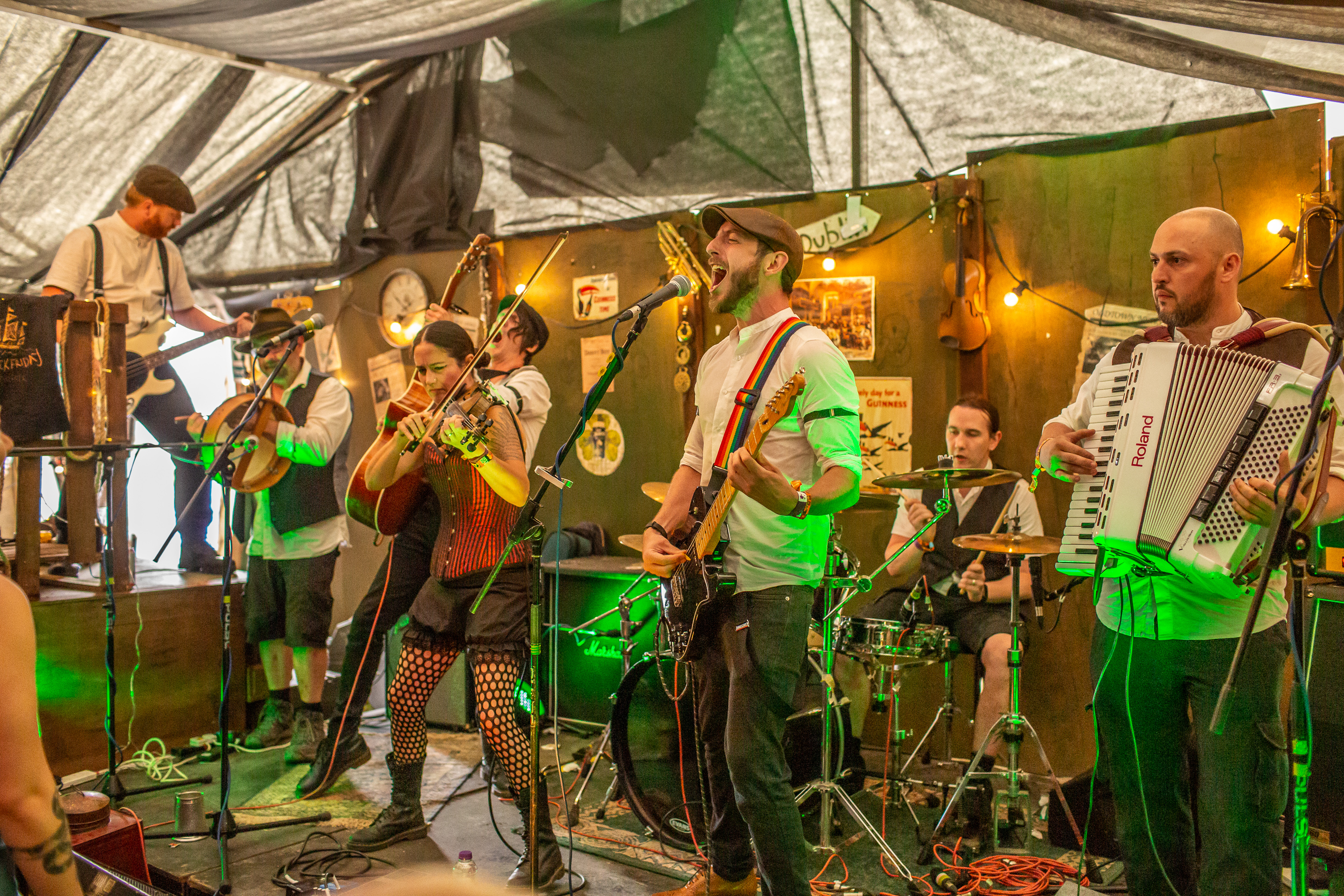 If you are both a theatrical and music collective then consider the small number of larger venues we have available in DSTRKT 5, Area 404, Oldtown and Metropolis. We would love to hear from more experienced crews who have both a strong collective of immersive performers and also like to programme music. You will be responsible for the creation, build, programming and running of your venue over the weekend. Your theatrics would need to run 1pm - 7pm Fri-Sun and be up for being part of the maze. Check out “The Villa”, “Jobcentre” or “Boomtown Bobbies” as examples. 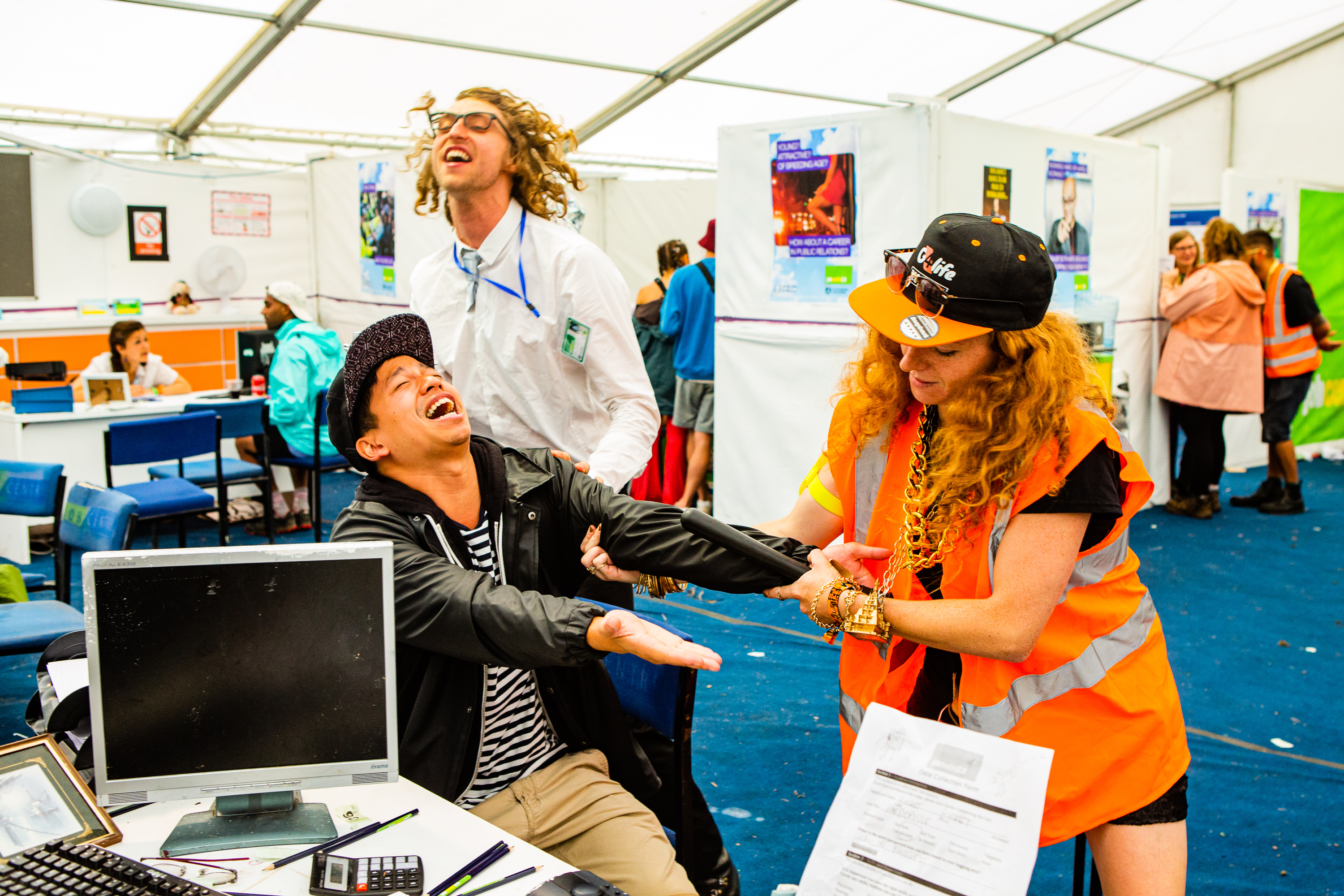 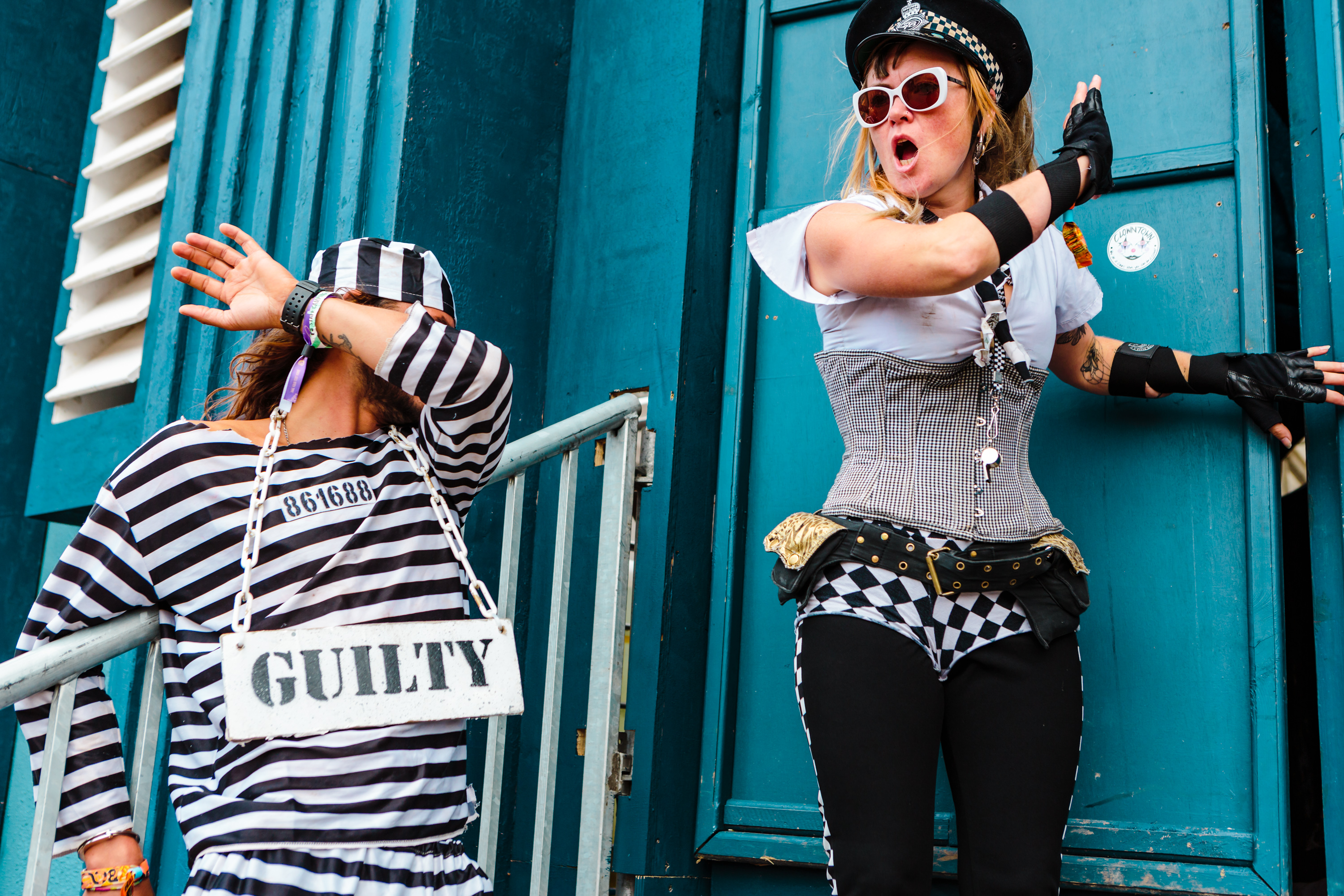 Boomtown is a fictitious city set within an alternative world, populated with a plethora of curious characters roaming the streets and guiding the citizens through the labyrinth of adventures waiting to be discovered. Each chapter delves even further into the mythology of Boomtown, with endless stories for you to be part of and make your very own.

Over the last decade, our theatrical ambition and vision has grown to unimaginable heights… What started off as treasure hunts and ‘passport’ stamp collecting has evolved into the largest interactive, story-led, fully immersive theatrical show in the world! But do not fear! It’s not as intimidating as it could sound…You can dip in and out of this rolling narrative as you please, picking it up then putting it down to suit your own tailored experience. Or you can go deep into the rabbit hole and immerse yourself in the twists and turns of the interactive game That is The Maze…

WHAT IS THE MAZE?

Utilizing our warren of street venues throughout the many districts, the hidden rooms and the 100’s of actors across the entire ‘city’, The Maze is designed to take you by the hand and help you delve deep into the storyline and guide you on your journey to be part of the fabric of Boomtown.  Every character, set and stage, from the streets to the balconies and show-stopping spectaculars are ready to draw you into the story, which culminates on Sunday evening in the colossal, multi-stage spectacular closing ceremony!

There are many ways to get involved with The Maze. But here’s a little hint… there is no singular entrance point! You can begin your journey simply by asking a ‘friend’ if you know them or knocking on an unmarked door…

In Chapter 10 AMI was unveiled and delivered a stark warning of environmental consequences. On 6th Feb 2020 we released the theatrical trailer where AMI delivered her next public address declaring that due to her warning being ignored she is putting Boomtown under a “State of Emergency”.

DISTRICTS AT A GLANCE

A world that suffers the consequences of present-day actions, as its citizens struggle to survive on the little natural resources that are left. A district where virtually all remnants of nature have been depleted but the one bastion of hope, the ‘beating heart’ of the district ‘The Last Tree’ stands strong, worshipped by everyone, this beacon of mother nature surely holds the key to humanity’s survival.

In a deserted industrial quadrant, scavengers pick through the remains of the fallen Bang Hai Technologies infrastructure. Area 404 is located at the former Sector 6 facility site.

Paradise Heights is a new gated community of pleasure and leisure facilities nestled alongside the business and banking district of Mayfair Avenue and home of the rich and famous movers and shakers of Boomtown. This 10 star resort style development is the jewel in the crown of Bang Hai Industries global business empire and offers those worthy of entrance an experience like no other in a world free for toil and strife, a dreamland where anything is possible promising you the best of everything money can buy!

Oldtown is the city’s original district and therefore the place most steeped in Boomtown’s history and folklore. The community is built on the land where the touring fair first settled and a strong presence of those original traveling families and their circus culture still exist in this section of the city. Here you will find the artists, performers, makers painters and the poets. It is full of characters with the spirit of Bohemia in their hearts.

Metropolis rose from the Downtown skyline like a shining beacon of the brand new age awaiting all who bought into the Bang-Hai dream… Now, as Artificial Intelligence permeates all aspects of the digital realm, this cyber sector of the city is oscillating at hyper speed. The facade still shines, the lights are on, but nobody is sure exactly who is home! Lose yourself in the electric atmosphere of this digital tech town where the future is now

Step back into Boomtown’s past … Set against a new age of industry bringing with it soot and grime but also skyscrapers and finery. In smoke-filled alleyways music halls and bars murmur of strike and revolution whilst on newly built gleaming avenues top hats and ball gowns strut. Sounds of banjos and basslines continue to resonate throughout, bringing with them an eclectic mix of people from all corners of the city, ready to soak up the sounds and the sights that make up the rich history of this city.

Please apply for Chapter 12 by filling out this form